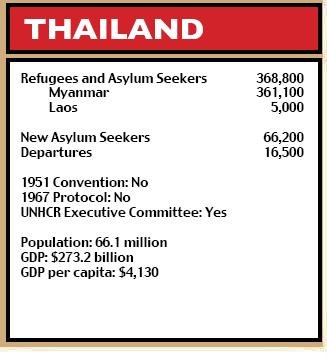 Thailand hosted about 200,000 ethnic Shan from Myanmar who had fled forced relocation and ethnic persecution since 1986, although the Royal Thai Government (RTG) did not recognize them as refugees. Some 111,100 refugees from Myanmar lived in closed camps, mostly ethnic Karen and Karenni and about 50,000 additional Myanmarese lived outside the camps, including other ethnic minorities and some political dissidents. Some 5,000 Lao Hmong remained in the Huay Nam Khao camp in Phetchabun province with more detained in Nong Khai.

Other refugees or asylum seekers living outside camps did so as illegal immigrants or as participants in a restrictive migrant labor program.

About 16,500 went to resettlement countries, three quarters of them to the United States, but about 50,000 more fled fresh fighting between the Myanmarese junta and rebels.

Authorities repatriated about 3,000 Lao Hmong from the closed camp in Phetchabun to Lao PDR in about a dozen incidents, most of them by force.

In February, the Governments of Thailand and Laos agreed to refer the issue of Hmong refugees to their defense ministries.

In May, a fire destroyed several hundred of the bamboo and straw shelters in the Hmong camp in Phetchabun province but injured no one. Anonymous authorities and aid workers alleged that the refugees set it to get the attention of UN Secretary-General Ban Ki-moon, who was in the region at the time, in hopes that this might prevent their repatriation.

In June, thousands of Hmong began a 350 km march to Bangkok to draw international attention to their plight, but riot police blocked their path, and arrested and jailed up to 600 of them.

In August, Thai and Myanmar labor ministers signed a memorandum of understanding to reduce visa fees on Myanmarese laborers from 2,000 Baht (about $58) to 500 Baht (about $15) per person but only for those currently holding permits. After they registered with the ministry, they would have to go to one of three processing posts in Myanmar.

Amendments to Civil Registration Act granted all children the right to birth certificates, regardless of nationality or immigration status, from August on, but not retroactively.

In October, authorities told the Hmong refugees that if no one volunteered to return to Laos that month, the military would again begin forcing them back, but Thailand's own political turmoil stalled the ultimatum.

In November, authorities handed 103 Hmong from 29 families to the Lao Government.

In December, the Thai Navy allegedly captured nearly 1,000 Rohingyas at sea and detained them at Koh Sai Daeng, kicked and beat them with sticks, denied them adequate food and shelter, pushed them back out to sea in unseaworthy boats without engines or adequate provisions, and abandoned them. The Indonesian Navy rescued some 450 in three boats off the coast of Aceh but no one found the others.

Also in December, the Cabinet authorized the interior ministry to issue migrant workers from Myanmar two-year extendible passports and work permits, if they verified their nationalities and submitted to other checks. Many of the migrants, especially those from ethnic minorities, however, were reportedly afraid that authorities in Myanmar would use the information to persecute their families.

In an informal process, the RTG often turns Myanmarese deportees over to members of the Democratic Karen Buddhist Army (DKBA), a splinter group allied with the Myanmarese regime, which extorted bribes for their release. The authorities no longer use the formal process, whereby the Immigration Detention Center (IDC) and UNHCR screen and clear deportations, but sets a 400 person-per-month quota in the informal process with deportations every Monday at various piers on either side of the Friendship Bridge.

Thailand is not party to the 1951 Convention relating to the Status of Refugees and has no refugee law and the 2007 Constitution does not provide for asylum. Refugees and asylum seekers have no legal status distinct from other foreigners and, under the 1979 Immigration Act, the presence of most of them is illegal.

A Provincial Admissions Board (PAB) intermittently screens asylum seekers for admission to the camps. The RTG permits international NGOs to feed new camp arrivals until it can establish a more regular pre-screening procedure.

Thai police routinely arrest and detain refugees outside the camps for illegal residence and, by year's end, there were 187 refugees and asylum seekers at the IDC in Bangkok. The IDC is overcrowded and lacks fresh air, sanitation, medical services, and food. Refugees from bordering states can choose between voluntary deportation and indefinite detention. Refugees from other countries generally have to remain in detention indefinitely until UNHCR can arrange for resettlement.

Authorities continue to detain some 158 Hmong refugees including 27 children, at least four of them born in detention, locked in two cells in Nong Khai after more than two years. IOM provides a nurse and teacher who visit regularly.

The RTG does not allow UNHCR to enter the Hmong camp to issue refugee certificates but, with UNHCR support, the Ministry of Interior (MoI) issued some 114,300 official identity cards to camp-based refugees from Myanmar over age 12. UNHCR issues documents with photographs to all asylum seekers and refugees who apply at its offices and to each member of their families. Authorities accept none of these documents, however, as evidence of legal presence in the country.

Freedom of Movement and Residence

Refugees and asylum seekers cannot freely move about and need written prior approval to enter or leave camps. MoI and provincial officials patrol outside camps and deregister, prosecute, and deport those they find outside the camps. District offices also held head counts early in the year. Authorities restrict aid and resettlement opportunities to camp residents. Many refugees participate in the restrictive migrant labor program (below) for some limited mobility.

Refugees are not eligible for international travel documents except for resettlement.

Authorities allow the Padaung refugees, who are tourist attractions because of the brass coils they wear on their elongated necks, neither resettlement nor freedom of movement. In August, Mae Hong Son authorities prevented a group of Padaung from leaving whom Canada, New Zealand, and Finland had already accepted. In September, authorities in Chon Buri's Sattahip district arrested 11 Padaung – three men and eight women who had gone missing in June – and charged them with moving without permission and their Thai boss, who had brought them down from Chiang Mai, with providing refuge to illegal immigrants. In December, the Mae Hong Son Provincial authorities offered the Padaung who had registered in 2004 to 2005 the options of moving to a camp and giving up their color card or staying outside the camp without aid or potential for resettlement.

Right to Earn a Livelihood

Refugees and asylum seekers cannot work legally. Refugees seeking employment outside the camp risked arrest, usually while in transport to work sites and police often demanded bribes for their release.

The Government does not allow new applicants to register for its migrant labor program but those who registered in previous years can renew their registration for 1,200 Baht (about $35), including a required medical examination.

In February, Parliament passed a new Working of Aliens Act offering rewards and allowing warrantless searches for the arrest of illegal migrant workers. It provides for up to five years' imprisonment, a 100,000 Baht (about $2,900) fine, or both for illegal work, and for fines of up to 10,000 Baht (about $290) for failure to carry a work permit, and requires employers to take deductions from employees' wages for an extradition fund. In contrast to the prior Act, which listed some 39 categories of work in which aliens could not engage, the new Act calls for a ministerial regulation to determine, within two years, the kind of work aliens may do along with its locality, period, and conditions. Since one of the express purposes of the Act is to develop the border economy, not much geographic latitude is likely. In the meantime, the old restrictions remain in force.

Since 2006, provincial governments in the south, where a Muslim insurgency continues, impose curfews on migrants and bans on their gathering in groups of five or more, driving motorcycles, and possessing unregistered mobile phones. Since 2007, this also applies to Ranong, Phuket, Phangnga, and Surat Thani. The changing scope of the policy encourages exploitation and ad hoc rulemaking in some communities. The headman in a village near Mae Rim, for example, subjects migrant workers to a 6 p.m. curfew and collects 600 Baht (about $17) from those he catches after that hour. The Government also no longer issues permits for spouses and children of migrant workers to stay, placing some children at risk of shelters taking them away from their parents.

Thailand also does not allow refugees to obtain business licenses or to hold title to or transfer business premises, farmland, homes, or other capital assets.

The RTG allows NGOs to provide food, primary medical services, and housing to Myanmarese refugees in camps, although it forbids concrete floors or public power supplies in them. NGOs refer refugees to government services for secondary and tertiary medical conditions.

According to the Ministry of Education, "non-citizen children can receive the normal compulsory level of education while they are dwelling in Thailand" but this does not apply to refugee children.